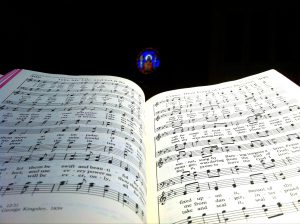 This past Sunday our congregation sang the wonderful hymn by Stuart Townend, How Deep the Father’s Love for Us.  Townend is one of my favorite contemporary British hymn writers.  If you haven’t discovered the hymns of Stuart Townend, Keith Getty, Christopher Idle or Timothy Dudley-Smith, then you have missed some real treasures!  These contemporary hymn writers have put out a body of work which is, for the most part, theologically solid, musically strong, sensitive to the rhythms of the church year, Trinitarian, and worshipful.
There is a line in Townend’s How Deep the Father’s Love for Us hymn which says, “How deep the Father’s love for us, how vast beyond all measure; that he should give his only Son to make a wretch his treasure.”  Did you notice the modern use of the word “wretch?” by Townend?  If you have followed the adaptation of older hymns into current usage you will be aware of the quiet removal of the word “wretch.”  The most well known examples are in the well known hymns, Amazing Grace and Victory in Jesus.   The phrase, “that saved a wretch like me” in Amazing Grace or “to save a wretch like me” in Victory in Jesus has been rendered in some modern hymnbooks, “to save one just like me.”  It seems that we just don’t like the word “wretch.”  It is entirely too negative for modern sensibilities.  So, there I was singing How Deep the Father’s Love for us when I noticed that someone had changed the last phrase from, “to make a wretch his treasure” to “to make us all His treasure.”  It took over 200 years for people to start meddling with John Newton’s classic Amazing Grace.  Stuart Townend is being de-constructed and re-cast in about ten years.   The problem is, until we really come face to face with our own sinfulness – our naked wretchedness before God, then we can never begin to comprehend the holiness of God.  There is a direct relationship between the comprehension of our sinfulness and our vision of God’s holiness.
So, I encourage you to think about the theological implications which quietly lay behind changing the words to hymns. Here’s another example to ponder and weigh in on this blog what you think.  The hymn The Church’s One Foundation was written in 1866 by Samuel Stone.  One of the lines goes,
“From heaven he came and sought her to be his holy bride;
With his own blood he bought her and for her life he died.”
In 1983 Laurence Stookey updated it (see current UMC hymnal).  The result is the following:
“From heaven he came and sought us that we may ever be
His loving servant people, by his own death set free”
Think about this change theologically.  What can we learn from this?  I would love to hear from you.  I am praying that God would raise up a whole new generation of hymn writers at Asbury Theological Seminary.   The best hymns are always written by those who have come face to face with their own wretchedness and then captured a glimpse of the depth of God’s grace.