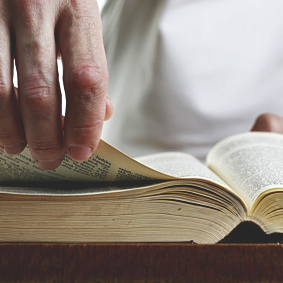 When people hear that we are singing the Psalms they sometimes ask, “Do you really sing them all?  Surely you mean the “old favorites” like Psalm 19, 23, 93, 100, right?”  “Surely,” they continue, “you as a Christian can’t sing Psalms like 109 and 137, can you?”
Psalm 109 and 137 are two of approximately eighteen Psalms that are considered imprecatory Psalms, i.e. they call down curses or judgment on someone (See, Psalms 5, 6, 11, 12, 35, 37, 40, 52, 54, 56, 58, 69, 79, 83, 109, 137, 139 and 143).  This raises a great question which is not just about singing Psalms, but preaching or reading the Psalms as well.
Are all the Psalms suitable for Christian use?
How do we reconcile the tension between, on the one hand, our confidence that “all Scripture is inspired by God and profitable, etc.” with our equal confidence that we should bless, not curse, our enemies?  That is the question which I would like to address.
First, all such honest, transparently painful cries found in the Psalms are cries of truth and faith.  The Psalmist turns their cries and pleas to God to act precisely because they know that it is not their place to do so.  We give up our own desire for human vengeance (unlike Islamic terrorism, or personal vendettas, etc.) and put vindication into God’s hands who alone judges and dispenses true justice.  The Apostles quote Psalm 109 after the betrayal of Judas so that they would not be trapped in personal unforgiveness, but rather put the whole matter into God’s hands.
Second, all the Psalms of imprecation point to our ultimate enemy, Satan.  It is true that we do not wrestle against flesh and blood, but we do wrestle against the powers and principalities of whom the flesh and blood are but minions and servants (Eph.6:12).  So this great enemy, this perpetrator of evil and injustice and death and rebellion against the Lord, rightly prompts our passionate cries for the Lord’s action – to end this night of darkness and death which the enemy has unleashed into this world, and to set things right again.  The ravages of depression in the lives of those you love, the tyranny of poverty and injustice willfully imposed by wealthy dictators upon the poor, the horrors of rape and torture enacted upon innocent victims, the bondages of addiction which entrap and destroy healthy lives and families – all of these “enemies” are the tangible outworking of principalities and powers against which we cry with the psalmist for the Lord to wipe out and deliver us from.
Third, we must never forget that as Christians we read all Scripture in the presence of the Risen Christ.  Even those Psalms which call curses down upon our enemies point to God’s answer in Jesus Christ.  God’s judgment has come, his wrath has been poured out, his vengeance has been paid – and all of it has fallen upon Christ.  Every cry for vindication and vengeance, every curse and desire for “payback” which the psalmist wants to see has come upon Christ on the cross.  Thus, every verse of a psalm which utters a curse is actually a window into the cost and pain of God’s own answer; and a proclamation (of sorts) of the incredible grace of the gospel whereby the wrath and justice of God (of which the psalmist only feels a very small measure) is willingly taken upon Himself.  Christ became a curse for us – our redemption is there pictured.  In the gospel we also come face to face with the depth of our own sinfulness.
Finally, the vivid language of the imprecatory Psalms expresses our hope as believers that there will be a final end to evil, and that it will be destroyed to rise again no more (Rev. 18).  One of the most vivid images in the imprecatory Psalms is found in Psalm 137:8,9 when the Psalmist prays a blessing on those who take a woman’s child and dashes its head upon the rocks.  The imagery is one which God Himself had given as a promise in Isaiah 13:16.  The birth of another generation of Babylonians (who the Psalmist sees perpetuating unspeakable horrors against the people of God) is a sign of the ongoing perpetuation of evil.  The birth of an infant represents a pseudo “new creation” by the Babylonians which must, in the end, give way to the biblical new creation where evil comes to an end and is destroyed with no offspring to rise up again to take up the mantle of evil.  The Psalmist reminds us that there will be an end to the evil in the world.  God is going to set things right.  History as we know it does have an end.  He will come again to judge the world, destroy all evil and usher in the New Creation.
So, for these reasons, I encourage Christians to sing all the Psalms, including the Psalms of imprecation.  The whole Bible is inspired by God and every line of it is profitable for “teaching, rebuking, correction and training in righteousness” (2 Tim. 3:16).  So, I’m going to keep on singing the Psalms – all 150 of them.