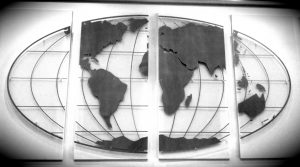 The eighth reason I am a Methodist is because of Wesley’s early appreciation for the possibility of what we know today as “global Christianity.” Few have given proper recognition that Wesley is one of the leading forerunners of conceptualizing the church in its full global, rather than sectarian, dimensions. In the post-Aldersgate period, Wesley’s preaching became so controversial that he was barred from preaching in the pulpits of the Church of England. Since he continued to preach in the open fields, he was charged with “trespassing” on the parishes of other ministers. He replied to this charge in a letter written in March of 1739 with what has become the most famous quote of Wesley, “the world is my parish.” In the letter he says, “I look upon all the world as my parish; thus far I mean, that in whatever part of it I am, I judge it meet, right and my bounden duty to declare, unto all that are willing to hear, the glad tidings of salvation.”1
It is difficult for modern-day Christians to fully comprehend the radical nature of this statement. However, the territorial conceptions, as noted earlier, were so strong that it was considered heresy to preach the gospel to those outside your parish. These territorial conceptions were one of the biggest barriers to the emergence of the Protestant missionary movement. In contrast, Wesley was ahead of his time in first conceptualizing the church in its full global dimensions and only secondarily in its particularity as, for example, Methodist Christians. Wesley asked why he should not preach the gospel in “Europe, Asia, Africa or America” for, with the Apostle Paul, he declared, “woe is me if I do not preach the gospel” (I Cor. 9:16-19). Wesley declared that he was prepared “to go to Abyssinia or China, or whithersoever it shall please God by this conviction to call me.”2  In today’s “post-parish” world we sometimes have a difficult time recognizing what a radical ecclesiology is embedded in this vision. Wesley seemed to understand that the church of Jesus Christ is indestructible, since Christ is the Lord of the Church and has promised to build his church. However, the indestructibility of the church is not tied to any particular institutional or geographic manifestation of it. With the dramatic rise of Christians from the Majority World, many of whom do not trace their history to the Reformation, there is a need to discover a deeper ecumenism which can unite all true Christians. Wesley anticipated the future multi-cultural diversity of the church and the common experience of rebirth from above, which unites all Christians of every age.
1  Frank Baker, ed., The Works of John Wesley, vol. 25, Letters I, 1721-1739 (Oxford: Clarendon Press, 1980), 616.
2 Ibid., 615.