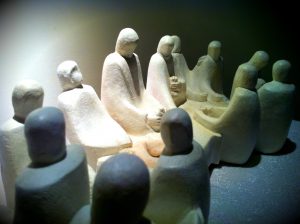 The fifth reason I am a Methodist is because of the strong emphasis on discipleship in our tradition. Eighteenth-century Oxford where Wesley studied was a place filled with spiritual apathy, deism, practical atheism, and low-Christology Arianism. In short, it was a world quite a bit like North America and Europe today. John and his brother Charles decided to gather a few students together to “observe the method of study prescribed by the statutes of the university.” The statutes (long ignored) required that students engage in the “frequent and careful reading of the Scripture.” The Wesley brothers decided to promote this by forming a small group for studying the Greek New Testament. It became known as the Holy Club. They were so methodical in their practice that the people in the Holy Club were given the nickname Methodist. So the very origin of the word Methodist lies rooted in a small-group-formation approach to catechesis.
Catechesis is, of course, a very important feature of the Reformed tradition. In my own experience, the Reformed emphasis on catechesis has been very effective in teaching the great doctrines of the faith. What is distinctive about the Methodist emphasis is how it seeks to go beyond simply giving correct answers to doctrinal questions. For Wesley, catechesis was learning to echo the entire rhythms of the Christian life (the word catechesis comes from a root word meaning “to echo”). This is a natural extension of the Methodist theme to focus not only on becoming a Christian, but what it means to be a Christian. Wesley learned this from the Patristic mystagogy model of discipleship. Normally, new believers were put through an initial instruction period prior to their baptism. This was an introduction to the Christian faith and culminated on Easter Sunday when the new believers were baptized. However, after baptism, the new Christian was put through a second phase, known as mystagogy, which brought the believer into the mystery of what it meant to be a member of the church. This was a period of instruction after baptism, between Easter and Pentecost. Wesley took this idea and united it with the community model of the early Celtic Christians. This developed an entire system of putting new believers in small groups or classes and various discipleship bands. The leader would report to the pastor on the spiritual state of those under his or her care. These small groups would meet and give an account of their week, sustain each other in prayer, and transparently confess their sins. Members in sin would be disciplined. The new Christians would also be instructed in some aspect of the Apostolic faith. They would worship together by singing a song. The meeting would be over in about an hour and everyone would participate. To this day this is still an excellent model.