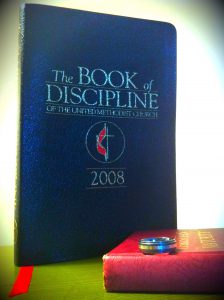 According to the United Methodist Reporter more than 900 United Methodist clergy have pledged to perform same-sex unions in open defiance of the Scriptures, of our ministerial tradition of holy conferencing, and of the Discipline of the United Methodist Church.  In response, a group of Asburians (either Asbury Seminary graduates or member of the Board of Trustees of Asbury) who pastor some of the largest churches in America (Tom Harrison, Charles Kyker, Ed Robb, III, Ken Werlein, and Steve Wood) have prepared a petition asking the Bishops of the United Methodist church to issue a statement that the Discipline will be respected. I support this petition because these petitioners understand that this is far more than a debate about human sexuality and marriage. View the petition here. http://www.faithfulumc.com/index.html
What is at stake is more than just a re-affirmation that Biblical marriage is between a man and a woman (though that is, in itself, a vital objective). The issue of marriage and human sexuality is but the “flashpoint” presenting issue.  There are two deeper underlying issues which we need to always keep in mind.  First, this is a struggle about Biblical authority and the great stream of apostolic orthodoxy. I have written  many blogs on this point, so I will not elaborate that point today.  Suffice it to say, we cannot even begin to reclaim our nearly lost heritage as Methodists if even our clergy advocate positions which are at variance with historic faith.  Second, this is a struggle about ecclesiology, especially the role of the episcopacy in our church. For clergy to do something in open defiance of the Book of Discipline is a serious breach of our unity, regardless of the issue involved.  There are many churches whose clergy are not under episcopal authority and are not bound to one another by a covenant. The Methodist church is not supposed to be among them.
Bishops must rise up and do what Bishops have been elected to do. Bishops are called by God, and ordained by the church, to defend the Gospel, shepherd the church and exercise church discipline. This shouldn’t require a petition.  It should be the normal expression of episcopal authority. A decade ago, Bill Hinson called for a special task force to create a process which would lead to an “amicable separation” between those called United Methodists.  This would not be a defiant church split, but a solemn process whereby the church allows those who are committed to historic orthodoxy, the Wesleyan heritage and secure episcopal authority to live under such a covenant. Tens of thousands of faithful Methodists (including myself) are not yet ready to pull the “amicable separation” lever, but this is the inevitable trajectory if our Bishops will not exercise their God-given, episcopal resolve to enforce our Discipline. Our eyes are on the Council of Bishops praying that God gives them strength for this hour. I hope that the Bishops issue the espiscopal letter which has been requested.  It will be a great affirmation that our covenant is still in force and that the “people called Methodists” can focus our energies and resources on spreading scriptural holiness throughout the world.