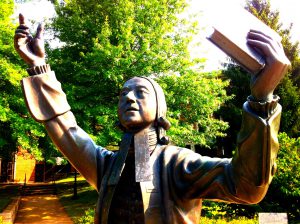 Third, Methodists affirm (along with most evangelical movements) the importance of conversion. On May 24th each year Methodism around the world celebrates one of the most famous conversions since St. Paul on the road to Damascus. On May 24th Wesley “unwillingly” went down to a Christian society meeting and there encountered a reading of Martin Luther’s preface to Paul’s Epistle to the Romans. During the reading of Luther’s preface to Paul’s Epistle, John Wesley experienced a profound conversion. Listen to Wesley’s words as recorded in his diary:
“About a quarter before nine, while the reader was describing the change which  God works in the heart through faith in Christ, I felt my heart strangely warmed.  I felt I did trust in Christ alone for salvation; and an assurance was given me that  He had taken away my sins, even mine, and saved me from the law of sin and death.” 1
Scholars and historians still debate what precisely happened to Wesley that night. What is clear is that, at some deep level, Wesley really heard the central truth of the Reformation: namely, that we are justified through the completed work of Jesus Christ on the cross of Calvary. We cannot add to that work. It is no mistake that Wesley’s transformation came as he listened to someone reading Martin Luther’s preface to the book of Romans. Martin Luther had experienced a similar conversion in his so called “tower experience” in the Augustinian Black Cloister in Wittenburg. As Luther read Paul’s words in Romans 1:17 on the way the righteousness of God is revealed through faith, he recalled: “I felt myself born anew and to enter through open gates into paradise itself!”
This emphasis on conversion was re-discovered in the Reformation, and by Wesley’s day, was a vital feature of the pietistic movement. Finally, conversion experiences became fully embedded in Methodism because of Wesley’s own experience, and later, through the strong emphasis on revival preaching and conversion in the camp meetings and in the frontier church planting work of American Methodism.
1 The Works of John Wesley, 3rd ed., vol. 5, First Series of Sermons (1-39), Journal Entry, May 24, 1738 (Grand Rapids: Baker Books, 2007), 103.