Christian Smith’s “The Bible Made Impossible”

Occasionally I utilize my blog to commend a really great book. Other times, I point out why a book, or more to the point, why a particular argument made in a book should be avoided. This is the case with Christian Smith’s book The Bible Made Impossible. Christian Smith is a sociologist at Notre Dame and genuinely wants to commend the Christian faith to the next generation. However, Smith seems to profoundly misunderstand what Christians mean when we say, “we believe the Bible.” Smith takes on a kind of popularized version of Biblicism and makes innumerable quotes from the internet and television programs showing how many Christian leaders say sloppy, sloganistic things about the Bible such as “Vote Responsibly – Vote the Bible” without careful reflection. Smith expresses considerable concern about these expressions of popular evangelicalism that see the Bible as an “answer book” or “instruction manual” ignoring the deeper message and intent of the Bible as a whole. 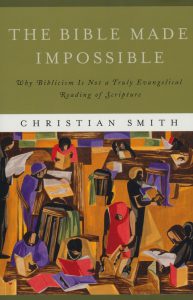 Smith then moves from an indictment of popular light-weight evangelical statements about the Bible to his central thesis. He argues that the “Bible is impossible” because of what he calls pervasive interpretive pluralism. What he means by this phrase is that the Bible cannot be declared wholly true since it is filled with so many mutually contradictory statements. Smith’s argument is that the Bible contains numerous contradictory and/or conflicting statements. Since both of these statements cannot be true, the Bible cannot be a “clear, consistent, and focused instruction, direction, information and guidance for users” (p. 17). The fact that the “Bible believing” church cannot agree on such matters as the length of the millennium, whether a rapture will occur or not, what actually took place at the Lord’s Supper or the cross, or the role of women in ministry is, for Smith, a great disaster which the church has, for 2000 years, simply been unwilling to come clean about. Smith concludes and states in emphatic italics the following statement: “On important matters the bible apparently is not clear, consistent, and univocal enough to enable the best-intentioned, most highly skilled, believing readers to come to agreement as to what it teaches” (p. 25).
I would not deny that Smith does make many valuable observations about how we can and should read Scripture better. He certainly does expose the sloppiness of televangelists and popular authors who make statements which do not best capture the purpose and intent of the Biblical text. However, I would say that 90% of what he suggests as the “better way ahead” has long been endorsed by serious evangelical thinkers who affirm that the Bible is God-breathed. However, I remain troubled that Smith’s thesis is built around his indictment of the “pervasive interpretive pluralism” of the Bible. It is clear to me that Smith misses several crucial points which are necessary for a proper understanding of Scripture. First, he fails to see the perspicuity of Scripture. Smith falls into the trap of being overly concerned, for example, that Methodists and Baptists cannot agree at every point on certain aspects about baptism, but misses the fact that Methodists and Baptists (along with Presbyterians and Pentecostals and a thousand other groups I might name) share a common faith which is, in fact, clear and univocal. Where is the great semper ubique ab omnibus (always, everywhere by everyone) of the church in Smith’s book? How can he miss that great global resonance of Nicea which unites the faith of the entire church? How can a dispute about tongue speaking be used to undermine the Apostles’ Creed? Second, Smith misunderstands the very nature of truth and how it is apprehended by the church (both around the world, i.e. globally and back through time, i.e. historically).
I am not sure if Smith’s problem here is fundamentally epistemological or theological. I think it is the latter, but those who know Smith better might help me here. Smith fails to see that many of the great truths of Scripture are so vast and so difficult for the human mind to comprehend that no one statement can fully capture it. Statements which, in isolation, appear contradictory are, in fact, pointing out different facets of a deep truth which transcends the very kinds of simplistic solutions which Smith claims he wants to avoid. His so-called “interpretive pluralism” is, in my mind, more about our inability to fully grasp the meta-narrative of Scripture than an internal and embarrassing problem with the text of Scripture. The fact that Wesleyans and Presbyterians disagree about pre-destination is not the basis for an indictment against the clarity of Scripture, but, more likely, a necessary tension which makes both Wesleyans and Presbyterians better Christians in the long run. Classic tensions such as Law and gospel, election and free will, truth and grace, judgement and mercy, and so forth, are not embarrassing signs of biblical confusion and an incoherent message. These are beautiful, multi-faceted diamonds of God’s self-revelation. They are glorious emblems of the vastness and depth of God’s nature and his own unfolding plan which will only be seen in its fullest clarity at the dawn of the New Creation.