4 Things United Methodists can learn from the Episcopal Church

Asbury Theological Seminary had the recent honor of hosting Archbishop Robert Duncan of the Anglican Church of North America (ACNA).  He preached in historic Estes Chapel from the book of Esther and reminded us all that Haaman’s gallows are being built for all those who stand for righteousness, but we have been called to persevere and to be faithful for “such a time as this.”
For decades we all have witnessed the slow and demoralizing decline of the Episcopal church as it has followed that well trodden path from vibrant faithfulness which joyfully embraced historic Christianity to a place of increasing hostility towards historic doctrines such as the unique Lordship of Jesus Christ, the authority of Scriptures, the atoning power of the death of Christ and the historicity of the bodily resurrection of Jesus Christ.  Those committed to orthodox faith watched in dismay as they increasingly heard statements from bishops and pastors and read decisions which were made by denominational bodies which revealed that many of their own leaders were no longer adhering to historic faith.   The tipping point came in 2003 when Gene Robinson from Fayette County, Kentucky became the first openly declared homosexual to be ordained bishop.  (He became the bishop of New Hampshire).  This became the presenting issue for decades of frustration with a church which had lost its way.
Tens of thousands of Episcopalians rose up and exercised what is known as Anglican realignment.  This is a process where a church recognizes that its bishop is no longer faithful to the gospel so the episcopal “seat” is recognized as being effectively empty.  The church then has to come under the authority of a new bishop.   What occurred was truly remarkable.  Thousands of Episcopalians gathered up the courage to leave their churches.  They were like sheep without a shepherd.  However, the African church saved the Episcopalian church in the USA.  Bishops from Rwanda, Uganda, Kenya and Nigeria, among others, began to extend episcopal oversight to new “mission” churches in the United States.  By 2009 this movement had grown enough so the Anglicans in North America could stand on their own.  In June of 2009 most of these mission churches were brought together under a single umbrella known as the Anglican Church of North America (ACNA). 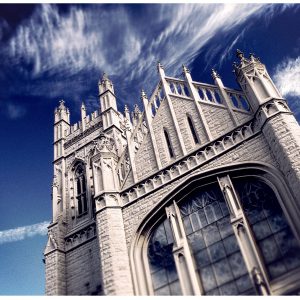 When Robert Duncan was ordained as the archbishop of the newly formed ACNA he electrified the assembly by boldly challenging the church to plant 1,000 new churches in five years.  The ACNA is doing just that, and will easily surpass the goal which, at the time, seemed impossible.  All across America Episcopalians (who for generations had given millions of dollars to build some of the most beautiful worship spaces in America) have been forced to walk out and leave it all behind.  Entire congregations had to start all over again in schools, storefronts, homes, or renting space from other churches.  Within a single generation the ACNA will easily surpass the Episcopalian church in numbers.
Archbishop Duncan has effectively led this new movement by challenging his flock to be faithful to the gospel and to remember that the church is not about buildings, but about people and about reaching those who do not yet know Jesus Christ.  “Courage begets courage” is one of the most important words of advice from the Archbishop to his flock.  What he means by this is that if the people of God take a courageous stand, then it spreads and others are encouraged to take a stand.  The result is a new Reformation.  Because of their courage, Anglicanism in North America has been saved and is being transferred from one wineskin (Episcopalianism) to another wineskin (ACNA).  More importantly, they have also sparked a new reformation within the church as a whole and provided a pathway for others to follow.  What can United Methodists learn from the last ten years of turmoil within the Episcopalian church?

– First, those of us who are committed to historic Christianity must have the courage to speak out and unflinchingly take our stand with Jesus Christ and the gospel.  We simply cannot be silent when pastors, District Superintendents, Bishops or other denominational leaders make statements which are in variance with our own historic witness as a church.  We must do it in love, but we must do it.

– Second, we should not hold out hope that at some point those holding these so-called “enlightened” liberal views will pick up their stakes and leave the church and go start their own church and build their own seminaries, and so forth.   That is not going to happen.  History teaches us that Christians committed to historic faith build churches and Christian institutions.  Those who forsake the core teachings of the faith, generally speaking, do not build churches or Christian institutions.  Instead, they attach themselves to vibrant movements and then take over the structures which were built by the faithfulness and sacrifice of others.

– Third, we must earnestly pray that our denomination will re-discover its own past and be awakened to a new period of faithfulness, evangelism, church planting and societal witness.  The United Methodist church has millions of members who have kept the faith, so we should pray for our church and work earnestly for its renewal.

– Fourth, those of us committed to historic Christianity must deepen our ties to the global church.  While we hope and pray it does not happen, the day may come when we, too, might be forced to leave our beloved denomination and find episcopal oversight in Africa.  Many of our faithful brothers and sisters in New England and the Pacific Northwest may need to act sooner rather than later.

A university President recently commented to Archbishop Duncan that because of the determined faithfulness of the ACNA, his grandchildren will someday hear and believe the gospel.  This testimony is true.  We must recognize that we are fighting for the faith of our grandchildren.  May we have the kind of courage which befits the people of God.